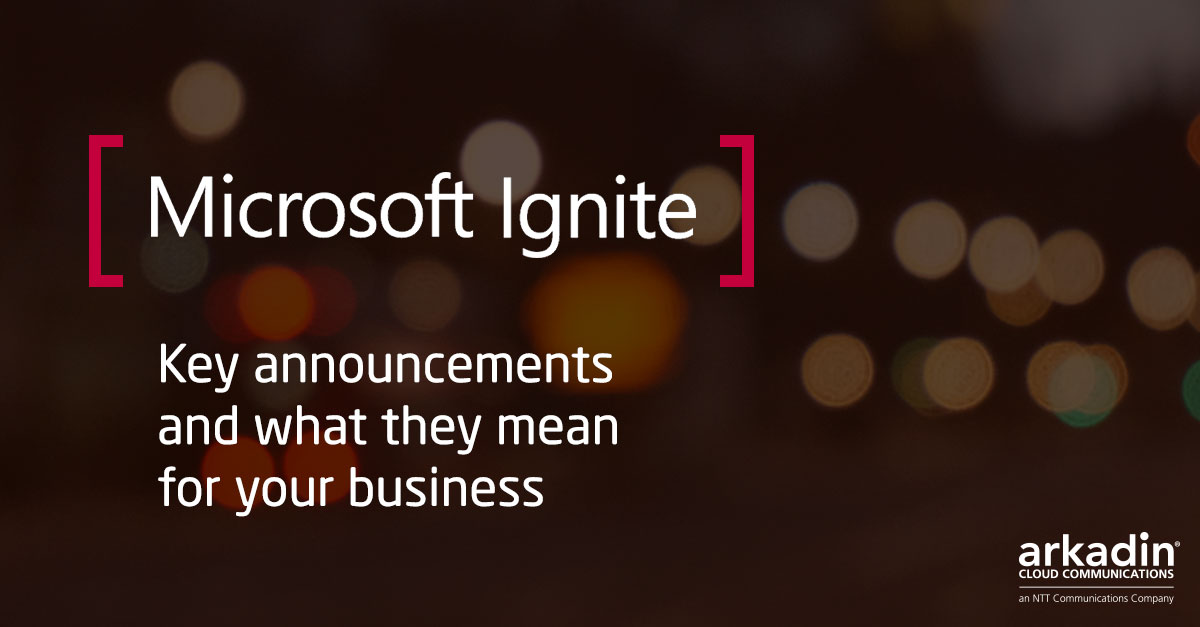 For anyone following the Microsoft Ignite Conference in Orlando last week, you’ll be only too aware that Microsoft is continuing to focus its Intelligent Communications strategy around Microsoft Teams. For the benefit of those of you who didn’t get the chance to attend, here are key takeaways from the event.

Over the last six months, we’ve seen major changes to the platform, with Microsoft claiming that Microsoft Teams is now “a complete meeting and calling solution”, including feature parity with Skype Online. We have seen a host of new features released and, according to Microsoft, this has resulted in 329,000 organisations adopting Microsoft Teams, including 54 organisations of over 10,000 active Teams users.

UC customers, whether on Skype Online or using Skype on premises, are asking us how and when they should make the move to Microsoft Teams. For customers of fewer than 500 users, Microsoft has made the decision for you. From this week, you’ll only be able to buy Microsoft Teams; Skype Online will not be available. Not only that, from November, existing customers with small deployments and who are on basic Skype functionality, e.g. not using Voice, will start to be automatically upgraded to Microsoft Teams. You will have the option to opt out, but if you don’t then you will be moving to Microsoft Teams.

If you are a larger organisation or you’re using Skype features not yet available in Microsoft Teams then the upgrade path is more complex and you’ll most likely want to engage a partner to help you. But it’s clear that this is the direction Microsoft wants you to go and now is the time to be considering how to migrate in the most productive and least disruptive way for your business. Until recently this was only available via Microsoft Calling Plans, but Direct Routing offers a number of advantages over that service.

Direct Routing really is a viable enterprise telephony solution for your business.

Are you wondering if Microsoft Teams Direct Routing is right for your business? Take our quiz to find out!

Takeaway 3: The Roadmap is Healthy.

Over the next few months, Microsoft will continue to release new features to Microsoft Teams, to add more value, improving its collaboration features and providing even more power as a Telephony platform. Media Bypass is being certified right now; a powerful feature that ensures that media traffic will stay local to your site and not have to route to the internet, thereby giving you improved voice and video quality, alongside reduced internet traffic.

See below an overview of Microsoft Teams features available right now and planned for the future: Microsoft also announced a certification programme for hardware, meaning that there will be an increasing number of vendor devices certified for use on Microsoft Teams, from video conferencing devices to desktop phones. More PBX-like features will continue to be released, like Call Park, and Group Pickup. So we will continue to see a convergence of features we’re already familiar with on Skype Server, eventually making it to Microsoft Teams.

On the Collaboration front, we’ll see more enterprise-grade features like improved data loss protection, granular administration control and more functionality on mobile devices. These features will be released to Microsoft Teams tenants as and when they become available, which means that over time the value you get from Microsoft Teams continues to go up.

So there we have it. Microsoft Teams has definitely arrived. It’s already capable of providing real value to an organisation as an intelligent communications platform and now it’s a telephony platform too, with a very promising future.

John Faria is a Global UC Product Manager, having joined Arkadin in 2017. His area of expertise is in delivering Unified Communications Transformations for large enterprise customers. John joined Arkadin from Applicable, where he was a key contributor to the development of their UC Cloud business prior to the acquisition by Arkadin last year. As the Head of the Applicable Project Office, John has an extensive background in delivering large-scale enterprise UC projects. He brings his experience with him and is now part of the UC Service Line team, strengthening and expanding Arkadin's UC Services portfolio.