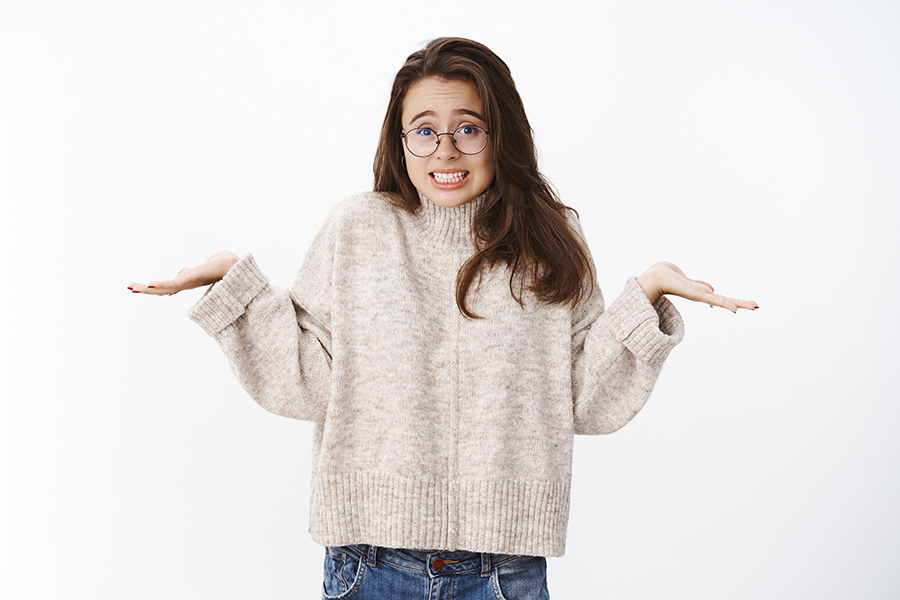 Why is it so hard to admit when we’re wrong? Why do certain people find it almost impossible? Here’s a real-life example. A friend recently disagreed with me about how to pronounce a certain actress’s name. She flatly refused to accept my version. I finally showed her a YouTube video of the woman in question, Saoirse Ronan, pronouncing her own name (in case you’re wondering, Saoirse is pronounced “Ser-sha”, like “inertia”). After seeing the video, my friend said “Well, even though you’re correct, I never back down when I think I’m right. It’s a question of conviction.”

While this example is innocuous, the attitude itself is problematic – and it can be very serious in today’s society, where we’ve all seen examples of powerful people who never, ever admit to making a mistake even when they’re demonstrably wrong. For some people, conceding that they’re fallible can evoke a deep psychological anxiety regarding the risks or the consequences associated with loss or failure.

Dr. Tim Sharp, Chief Happiness Officer at The Happiness Institute, explains: “I think the reason some can’t apologize isn’t actually because they don’t like to be wrong, but because it’s seen as an inherent character fault.” He says that for those who refuse to apologize, the irrational need to always be “perfect” rules their ego and they feel their mistakes are unforgivable. “The difficulty in admitting failure largely comes from the unrealistic expectation that ‘I should get it right all the time,’” he says.

These types of people believe never admitting fault makes you look stronger, but Sharp says they could not be more wrong, because a good leader always admits their mistakes. “There’s some actually very interesting research that leaders who express vulnerability and are more open to being fallible tend to be more highly regarded,” he adds. Leaders with a deep sense of accountability can inspire people to think of them as deeply trustworthy and inspire higher levels of engagement and productivity.

The meaning of intellectual humility

This personality trait is the opposite of intellectual arrogance or conceit. Simply put, it resembles open-mindedness. Intellectually humble people can have strong beliefs, but are able to recognize their fallibility and are willing to be proven wrong on matters both large and small. Intellectual humility includes an awareness that one’s beliefs may not be right. The trait has only recently begun to be studied by researchers. Yet this characteristic may influence people’s decision-making abilities in politics, health and business.

Mark Leary of Duke University specializes in the character type. He says the trait is important to study because it affects many aspects of how people interact with each other. “If you’re sitting around a table at a meeting and the boss is very low in intellectual humility, he or she isn’t going to listen to other people’s suggestions, yet we know that good leadership requires broadness of perspective and taking as many perspectives into account as possible.”

Leary and his co-authors suggest that intellectual humility is a quality that could be encouraged and taught. “Not being afraid of being wrong – that’s a value, and I think it is a value we could promote. I think if everyone was a bit more intellectually humble we’d all get along better, we’d be less frustrated with each other.”

How we can become more intellectually humble

Intellectually humility is crucial for learning, especially in our hyperconnected world. Because technology makes it easier  to lie and spread false information, we need intellectually humble, curious people to correct the course.

In order to foster intellectual humility, three main challenges must be met:

Acquiring intellectual humility isn’t easy, but it’s a quality worth striving for. It doesn’t mean we have to give up on the ideas we love and believe in. It just means we need to consciously choose those ideas, be open to adjusting them, seek out their flaws, and never stop being curious about why we believe what we believe.