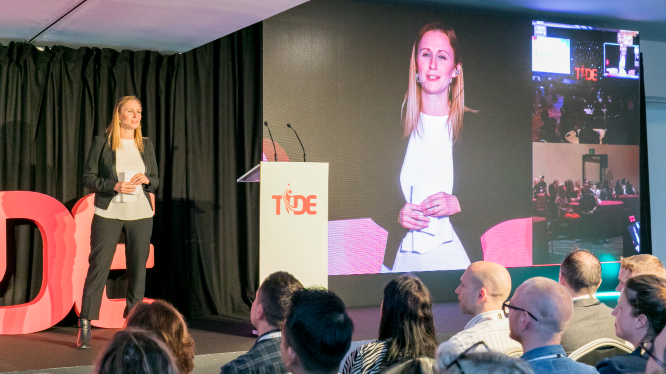 If you suffer from a fear of public speaking, you’re in famous company: Nicole Kidman, Abraham Lincoln, Sigmund Freud, and Thomas Jefferson all went out of their way to avoid speaking in public. One of the world’s wealthiest men, Warren Buffet, dropped out of a college speech class rather than talk in front of his peers. An extreme case was Mahatma Gandhi. According to an article in The Atlantic, Gandhi was due to speak in court but only managed to say the first sentence of his speech before panic overtook him and an assistant had to finish for him.

Every one of these people had to devise strategies for overcoming their fear.

Our very own Marie Parrege (Head of Customer Delivery EMEA, Montpellier) had to do the same when she was recently invited to address the entire Arkadin staff – a live audience of 300 and the rest via webcast – and she admits she “freaked out” a little at first. “Public speaking doesn’t come naturally to me, maybe because I wasn’t much exposed to it in during my studies. But I wanted to try, despite my nervousness.”

Two weeks before the presentation, Marie’s manager sent her to Paris for a two-day public speaking course, where the instructors taught participants techniques from how to calm their fears and how to visualize a presentation to how to better project their voices, control their breathing, and look their audiences in the eyes.

“Part of the course involved being filmed as we spoke. That was the most helpful tool for me, because when I was speaking, I didn’t feel confident at all, yet the group told me I appeared very cool and collected! It proved to me that we sometimes have a poor self-image but others don’t see it that way at all. That removed a lot of stress for me, right away.”

What happens to our bodies when we speak in public

The fear and anxiety public speaking may arouse is adrenaline-based. It can make our hearts pound, our palms sweat, our minds race.

These sensations are unpleasant, but they won’t kill you. Because adrenaline is your body’s way of preparing you to do whatever needs to be done in any stressful situation. To fight for your life (well, for your presentation at least). To find that well of inner strength you didn’t know you had. It helps your heart pump a little harder, it helps you stand a little straighter, and it helps you be ready to do a better job than you ever thought you could.

So here’s an idea: instead of fighting your adrenalin-based fear, why not try redefining it as a sign of good energy? Tell yourself that your sweaty hands and pounding heart and racing mind are just the tools you need to knock your speech out of the park!

By understanding that these symptoms are shared by everyone who fears public speaking, you can distance yourself from them. Next time you’re asked to speak and your heart starts to pound, you can rest assured that happens to everyone. Even Prince Harry, Duke of Sussex!

Techniques to calm the fear of public speaking

1. Be prepared but don’t memorize. The best way to push fears away is to know your material so well that you don’t have to think about it. BUT! This does not mean you should memorize a word-for-word script. Because if you stray from that script, you might feel you have to circle back to include a point you initially forgot, and then panic can set in. Marie says, “There’s room for spontaneity when you speak in public. It’s important to rehearse, and it’s fine to have notes – it gives you something to do with your hands – but it’s also important to be natural when you speak.”

2. Shift from “performance” to “communication”. Change your perspective from feeling you’re being evaluated to feeling you’re being of value. You’ll then view public speaking as an occasion for sharing something with people you think they’ll benefit from, rather than an occasion where you’ll be tested and judged. That shift relieves you of the burden of worrying about how you appear to others and allows you to focus on how best to get your message across. “People aren’t really judging you, they want to hear what you have to say. So much of the fear of public speaking is self-inflicted”, adds Marie.

3. Don’t be afraid that you’ll freeze. It’s possible that you will. But it won’t be the end of the world. All you need to do is say something. Say anything! If you draw a blank, go for broke and tell the truth. Say “I have totally forgotten what I was going to say.” Your audience will identify with you because they empathize with you. They might laugh. But that will make you laugh. And then you’ll relax, because you’ll realize the audience isn’t going to eat you. So smile, take a deep breath, and begin again.

Armelle joined Arkadin in 2011 to take on HR for EMEA and as Deputy to Global HR, setting up HR Information System and global processes and programs. She followed by leading Marketing for EMEA, focuses on key product launches and business-driven lead generation activities. After graduating from Columbia University in New York City and HEC business school in Paris, she started her career at Renault in Sales and Marketing, before moving to Human Resources positions in Sales, Engineering, Logistics as well as Manufacturing. She then joined Schneider Electric. Today, Armelle is Chief People Officer at Arkadin.