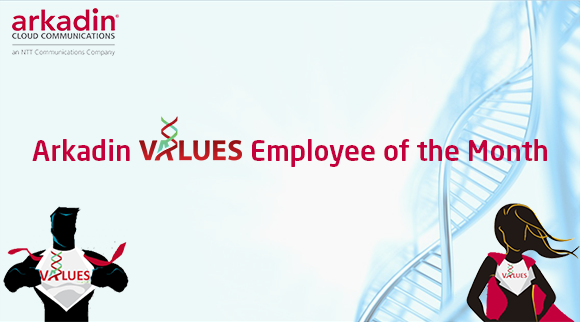 Gina Hedberg is Arkadin’s IS Manager for the Americas. She’s been with Arkadin for 7 years… or, if you look at it a different way, for 18 years…

“I started as a Teleconference Reservationist at ConferencePlus in 2001, taking inbound calls to set up new customers and users. Way back then we didn’t even have the concept of an Anytime call…everything was scheduled for a specific date and time. Then, in 2012, ConferencePlus was acquired by Arkadin and I became part of the Arkadin family. I never changed jobs, but the name of my employer changed. My first job as an Arkadian was in Customer Care and it was definitely one of the more challenging roles I’ve held. It takes a special skillset to balance the needs of the customer while keeping Arkadin’s best interest in mind. It’s almost 7 years later and I still have a lot of admiration for that team.”

Women should have a bigger place in technology

Gina’s career is especially interesting because not that many women hold managerial positions in IT or tech in general. In fact, in 2017, only 26% of professional IT jobs were held by women. Gina says: “I absolutely think more women should consider a position in technology! And managers should encourage it, too… Imagine the impact it could have on the hiring process in addition to the field itself. You’re basically adding an entire demographic to the candidate pool and creating a more diverse workforce. I also believe it’s important to foster our daughters’ interest in STEM learning to create a more equitable future for them as well.”

A personal story about our value of Respect

“Respect is probably my favorite of Arkadin’s four core values and I try to exercise it every day.  One recent example stands out in particular. Typically, IS stays behind the scenes and the account team manages the customer interactions, but this particular customer requested several times to talk to someone ‘technical’. From the start of the meeting, it was obvious that the customer wasn’t pleased with some recent issues and how they were handled. To me, Respect is about treating others how you’d like to be treated and I think that empathizing with the customer and acknowledging their concerns went a long way to begin repairing the relationship.”

Why did Arkadians vote for Gina? “Gina somehow keeps the black hole of the unknown covered, keeping our ever–changing roadmap smooth. She seamlessly manages the heavy workload and demand by gracefully challenging us to question our own motives for the sake of the bigger picture. Gina is a true leader, and we will forever appreciate her contribution.​”